Yesterday I had physical therapy again. I really love the journey there, which follows the Bay for a while. I know, I know, I’ve written frequently that the color of the water changes often, defending on the season, weather, time of day, etc., but I’m so awed by the water which lately has been a very beautiful emerald green. Every time we drive along the Bay, I take photos. I can’t help it; it is just so beautiful. I still can’t seem to capture the true emerald-green beauty. The photo at the right is probably the best I’ve gotten so far, but even that doesn’t capture the beautiful color.  You can’t see it in this photo, but there is still a lot of ice covering the Bay even though there’s not much snow on the ground. 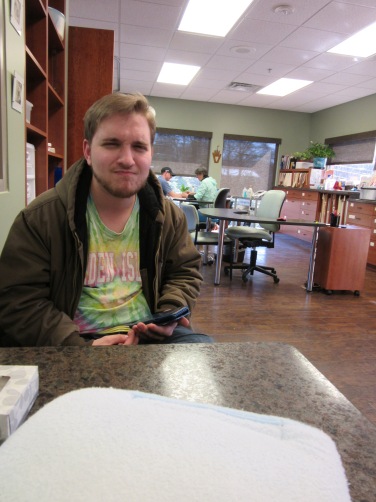 I remembered to take a photo of my physical therapy room yesterday. In the background, my therapist is working with a guy while I’m sitting at a small table with my hand/arm wrapped in warm towels for 15 minutes to warm up the ligaments before I go to the table for my session with her. JJ thought I was taking a photo of him so he pretended to frown, but I said, “No, I’m trying to take a photo of the towels–and the room.”

Ai yi yi, Katy, my therapist, really stretches my fingers and wrist! Although I do my best at home, Katy is able to massage, stretch, and bend my hand/wrist way past what I am able to do on my own. She works my hand into discomfort–and a bit beyond–until I gasp. By the end of the session, there usually is improvement in my movements. For one thing, Katy doesn’t stop until there IS improvement. Tuesday she told me that I couldn’t leave until I was able to bend my wrist to a certain degree. I said, “Great! I’m NEVER going to be able to leave here.” But I succeeded in bending my wrist to her satisfaction. Whew! I usually exercise my hand twice at home before going to therapy, but not afterwards because my hand is too sore.

Whether at therapy or at home, I’m able to gain more mobility after exercising than before. However, between exercises, my hand stiffens up again and I lose some progress. I’m surprised that my hand is still swollen almost two months after the surgery. Sometimes it seems as if I’m making very little progress at all. It feels like two steps forward and one-and-a-half steps back. It’s very frustrating. I try to remind myself that I can move my fingers much better than I could at first.

A few sessions ago, I heard a therapist–not mine–telling another patient that when he had surgery and while his hand was in the cast, his brain learned that his hand was injured so it compensated by not working the injured hand (or something like that). So now he has to teach his brain to remember to make his hand work. That is one of the purposes of the exercises, she said–to make the brain remember how to move the hand. I don’t know if that is true of every patient or just true of that particular patient and his specific injuries, but I’m assuming it’s true of everyone. I thought that was interesting.

Hearing about how the brain changes how the body functions because of physical injuries made think of the emotional injuries caused by abuse. I recently read an article called  Why Does The Pain Linger? The Aftermath Of Loving Psychopaths And Sociopaths. Narcissistic abuse is in the same category and is mentioned in the article. The article is about intimate partner abuse, but I think it’s true of any sort of abusive relationship.  The article stated:

A person’s psychological well-being and physical health can be on the line because of exposure to harsh behaviors and mind games.

Our brain responds to how we are treated.

Two of our stress systems, the Locus Coeruleus Norepinephrine System (LC-NE) and the Hypothalamic Pituitary Adrenal System (CRF-HPA) can really take a pounding in relationships that involve intimate partner (emotional or physical) abuse.

When these systems are activated repeatedly or if the incident is severe enough, just once, the impact on a person’s mental health can be tremendous.

There are some individuals who have been exposed to manipulation, betrayal and abuse for such an extended period (chronic) that they develop heart, immune, pain or fatigue disorders.

This pain could potentially lead to trauma-related conditions such as

Aside from the potential life threatening encounters for those who are physically abused, individuals exposed to emotional abuse are also under dire circumstances.

The pain lingers after psychopathic love relationships because the brain was exposed to abnormal conditions.

We are not ‘made’ to be treated harshly and as a living being we change in response to that mistreatment (e.g., might develop anxiety, insecurity, depression, PTSD). This is true of people and many animals.

Our brain circuitry and chemistry respond to the people in our lives. It attempts to adapt and normalize our experiences.

Although neuroplasticity is a necessary process for our brain, when it has to adapt to a life of deception, conning, aggression, and inconsistent behavior there will be consequences.

Adapting to the pathology of another can lead to decompensation in the mental and physical health of the non-disordered person.

Paying attention to the type of people we allow in our lives is vital. Others can significantly impact our neurobiology. This could forever alter how we feel and think.

I was thinking that in many ways physical injuries and emotional injuries are very similar. In both cases, the brain compensates for the injury. In both cases, the brain has to be retaught to gain normalcy. Just as a person with a physical injury has to keep exercising to train the hand to move, so an abuse survivors has to work hard to override the lies with the truth. In both cases, progress seems to be painful and slow and frustrating, with two steps forward and one-and-a-half steps back. My hand surgeon told me that while a person can regain mobility after an injury, often full mobility is not regained–with some injuries more mobility is regained and with others less.

I hate it, by the way, when people tell people that they are sinning or lack faith because they struggle to overcome the damage of abuse. That’s like telling a person that he is sinning because his injured hand isn’t working right. I’m working VERY, VERY HARD to recover from the damage of a fractured wrist. Survivors also work VERY, VERY HARD to overcome the terrible damage done to them by abusers.  It isn’t the fault of victims that they were abused, anymore than it was my fault that I fell on ice hidden by a layer of snow. It takes great strength, courage, and faith to work to overcome both physical and emotional injuries.

Recovery from both physical and emotional injuries can take a long, long time. Because toxic people can cause so much damage, I’ve learned to become as careful about who I allow in my life as I have become about walking on snow/ice.

After yesterday’s therapy session, JJ and I met EJ at Culvers to celebrate JJ’s birthday. Actually, EJ’s birthday is next Tuesday so we sort of celebrated his as well. Our favorite Culver’s is across the street from the Bay so we always have a beautiful view while we eat. 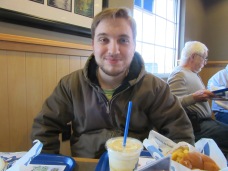 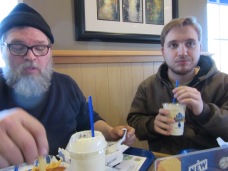 When we arrived home, we picked up pieces of items Hannah had chewed up while we were gone. We try to put away anything she could possibly get into, but she is good at finding new things. Among other things, she chewed up one of EJ’s magazines and the sympathy card the vet had sent when Danny died. Sigh.