Last week was very difficult, but I am not free to write about most of it. I would appreciate prayers as we deal with difficult situations.

A few weeks ago Kate, my occupational therapist, mentioned that she loved classic jelly beans, so I finally got to the store and bought her a bag which I gave her at the beginning of my session with her on Tuesday. I told her that I was planning to buy her jelly beans ever since she told me she loved them, and she was not to consider them a bribe because my hand had felt especially sore so I didn’t do very well with exercises at home. I told her that I thought she should probably give me five demerits. Although I hadn’t gained much on some of my hand/wrist movements, I had made so much improvement with turning my hand palm up that she was thrilled and gave me a sticker at the end of the session. She also gave me something that looks like a piece of very heavy sticky tape to put over my scar to soften and reduce the scar. It’s reusable so I put it on at night and take it off during the day. I think she called it a “scar strip.” I didn’t know what it is or why it worked so I looked it up on the Internet. You can read about it here. I think it’s rather amazing. My scar is looking better already.

I’ve had problems doing the hand exercises that require me to bend my wrist. Tuesday my therapist suggested that I “let gravity help” me by putting my arm on the table with my hand hanging off it and then pushing it downwards. I tried that and it is working much better for me. I’m working hard on the exercises and I’m hoping that when I see her tomorrow, she will be impressed with what I’ve gained.

Tuesday JJ was in a foul mood and complained so much about driving me to my hand therapist that I told him that from now on I will take myself. Driving myself involves me riding into work with EJ in the morning so I can drive the vehicle back home. Later in the afternoon, I drive myself to my therapist and pick up EJ at work afterwards. From there he drives us home. I was anxious about it because I was not sure how well I could drive with my limited mobility hand, especially in heavy traffic. Also, I wasn’t quite sure I could find my way from the therapist to EJ’s work with my very poor sense of direction. We have GPS  and I could find my way once I was on a familiar street, but I had to ignore the GPS for the first bit because it doesn’t take into account that turning left onto a very busy street–with no stoplight–is difficult most of the time and impossible during heavy rush hour traffic. So I studied the route and figured out that I would need to turn right, right, and right and then turn left at a corner with a stoplight and then our GPS and I would be in agreement and I would be ok for the rest of the way.

I made it home from EJ’s work on Thursday morning. I thought driving would be difficult, but actually the most difficult part was being able to adjust the seat and open/close the door with my injured left hand. Later in the afternoon I got in the suburban to drive myself to therapy, I put the key in the ignition and turned it….and nothing. It wouldn’t start. It didn’t even try. I had to cancel therapy and I couldn’t pick EJ up at work which means he was stuck there. Fortunately, he was able to get a ride home from a co-worker who lives nearby, but he had to leave an hour early. I don’t drive the Suburban much and I didn’t know that, unlike most vehicles, it was possible to take the key out of the ignition without the sub being totally turned off so the battery got drained. Hopefully, I will be able to make it to therapy from now on.

Early Thursday morning when I went out to let the ducks and chickens out of the coop, I discovered that Esther had died. Her death wasn’t really a shock because she was an old crippled duck. However, it was rather sad.  EJ took care of her body before we drove to his company.

Hopeful of Spring, EJ and I put the patio table and chairs on the deck a week ago. Then we got a couple inches of snow this Saturday. I glowered at it as it came down because Winter seems to be hanging on for forever this year. But I’m thankful that we didn’t get as much snow as the Upper Peninsula. Some places there were getting an inch snow every 20 minutes! The snow is mostly gone again but there are some very icy patches.

Friday EJ and I celebrated Passover together. We celebrate as believers in the Messiah as our Passover lamb. (You can read about it here.) We love the Biblical holidays because they have deep meaning and involve all the senses. Hannah loves participating in all our activities and she insisted on joining us. I gave her a couple special treats when we ate our Matzah.

We tried to take Hannah for a drive to a lake last weekend but she wouldn’t settled down and kept trying to get into the front seat. It was so distracting and stressful that we ended up aborting the trip. After we returned home, I found Hannah a harness on Amazon that buckles into the seatbelt so she is restrained. We took her for a drive to the auto shop on and it worked wonderfully. I expect we will have fun adventures with her this summer.

We have two bathrooms in our house–one through the master bedroom and one opening into the living room, which is our guest bathroom. The guest bathroom is next to JJ’s old bedroom so when he lived here, it was mostly “his.” It was always cluttered with his personal grooming stuff, so I wasn’t really motivated or inspired to try to decorate it. However, after JJ moved out and I was able to tidy everything, inspiration hit. EJ has been collecting little lighthouses from Goodwill. He has bought only the replicas of Michigan lighthouses, some of which we have visited. EJ hung a shelf for me and we put the lighthouses on it. We would eventually like to paint the shelf white to match the trim or, better yet, build a shelf that is the same style as the bathroom. However, this shelf is good enough for now. I also arranged the shells and corals that my friend in Texas found along the beach and sent to me as a gift.

When EJ and I bought our first house, two of my co-workers gave us an original signed drawing of the Little Sable Point Lighthouse, which is located in northwest lower Michigan. It’s been hanging in our living room, but I moved it into the bathroom. While I was arranging everything, I noticed that one of the lighthouse replicas was the same as the lighthouse in the drawing. I thought that was really cool. 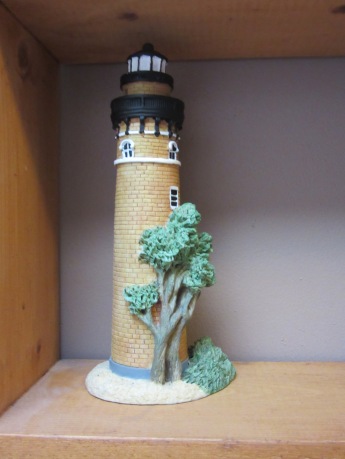 Replica of the same lighthouse.