A Hint of Autumn

Last week several mornings started out with heavy fog. Once the fog dissipated, the skies were very blue–the deep vivid blue that occurs only in the autumn. The trees are just beginning to get some color. The temperature has been both cool and hot at the same time. The mornings start out cool but the temperature heats up a little during the afternoon. Even though it’s warm, there’s an underlying coolness that hints that colder weather is coming. It is difficult to describe.

The days have been passing quickly; it’s already almost a week since I last wrote! Last week I did little tasks, including putting up a flag pole with a decorative wind sock thingy in the expanded garden. I think I probably bought the wind sock from a child raising money for school when we lived downstate. I put it up to act as sort of a scarecrow to maybe scare away flying predators who might go after our chickens. EJ and I thought the chickens might be more vulnerable with such a wide open area. I think the crows who live in our Enchanted Forest chase away most predators, but I didn’t want to take any chances.

The chickens really seem to be enjoying their expanded territory. I enjoying watching them through the window as their wander around. 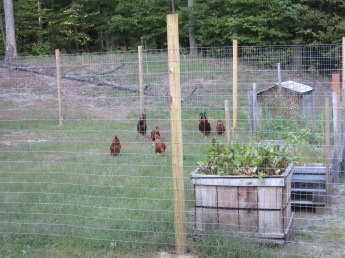 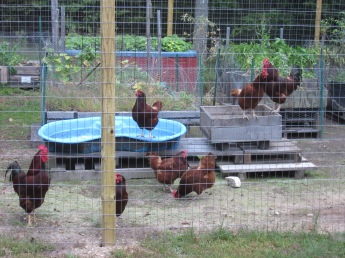 Saturday EJ and I enjoyed a quiet day. Sunday morning EJ, Hannah, and I went to TSC to buy some t-posts. Shortly after we returned home, our friend T. stopped by. EJ and T. have been friends since high school, and he is an “adopted” part of our family. JJ has always called him Uncle T. Hannah adores Uncle T. She got super excited when she saw him, and as soon as he sat down on the couch, she cuddled right up to him. Hannah is such a cute dog.

T. visited for a couple of hours. After he left, EJ and I went out to get some work done. We started to attach fencing to the t-posts we had put up last week to protect the cherry trees from the deer, but we were short a few feet so we postponed that task and worked on pounding the new t-posts in next to the apple trees on the hill. Once we get more fencing, we will encircle each apple tree so the deer can’t eat them during the winter.

I had several tasks I wanted to get done today. I started not long after EJ left for work because I wanted to get as many things as I could done in the cool of the morning. I started washing our clothes and after each load was finished, I took the wet clothes outside and hung them on the clothes line. In between loads, I filled a wheelbarrow full of potato stones from our rock pile. They are called “potato stones” because they are about the size of potatoes. Uh, I didn’t exactly “fill” the wheelbarrow. I put in just enough to not make the wheelbarrow too heavy. Then I pushed the wheelbarrow down the driveway. I had noticed that some of the rock dams I had built in previous years to stop erosion along the driveway were getting covered with sand that was carried down by heavy rain. So I used the potato stones to rebuild the dams. I figured that I will take one wheelbarrow load down the driveway each day to rebuild the dams until I have them all fixed.

After I finished the rock dams, I took some tools down to the cherry trees and moved the posts closer to the trees as EJ and I had discussed. It was about noon-ish by this time and the day was warming up. Some of the posts were a bit difficult to pull up–I had to use a crowbar, shovel, and effort to get them out of the ground. I felt very hot and sweaty and had to take a break. But I finally got all the t-posts pulled up and relocated closer to the trees. I then pulled the fencing tight and attached it to each posts. With the enclosed area smaller, I had enough fencing to go all the way around the trees. The fencing doesn’t look picturesque, but we need to keep the deer away from the trees. Last winter they munched on the apple trees, almost eating one away to nothing.

The cherry trees are now protected.

EJ often goes out with me in the evenings to shut the chickens up in their coop. I have Christmas lights in the coop to provide light when I am out there. I think it looks really cozy, especially with the chickens all settling in. EJ thinks it looks like a chicken sukkah. A sukkah is a temporary shelter covered in natural materials built during the Feast of Tabernacles.  Sassy, our alpha rooster, has been nesting on top of the enclosed litter box, which we use as a nesting box for the hens to lay their eggs in. Sassy looks like a king on his throne. Lol.

Some of the chickens on top of the dog house. 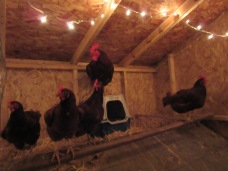 Sassy on his litter box throne.

After we get the chickens shut up safely in their coop, EJ and I always spend a few minutes watching Monty the bat flying around feasting on insects. Yes, we named the bat. Our property seems to be his territory because he circles right overhead every night. Sometimes we see two bats. We call the second one Mrs. Monty. Of, course, we don’t know their gender but it keeps things simple to call them Mr. and Mrs.

← A Ruff Night Out
A Funny Type of Breed →

9 Comments on “A Hint of Autumn”