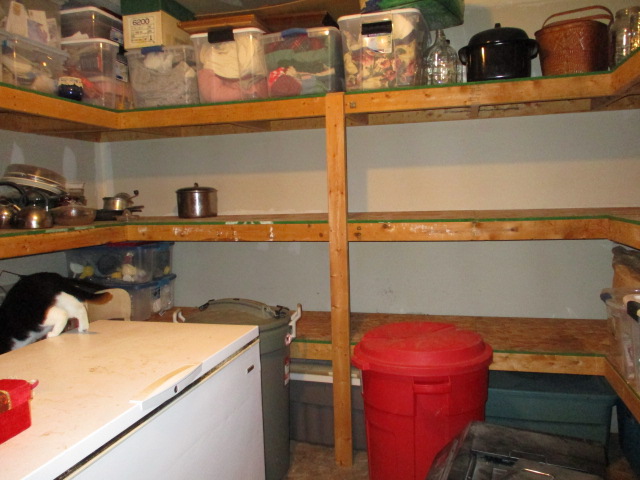 EJ and I went outside Saturday night, hoping to watch the Perseids meteorite shower. However, the waxing moon washed out most of the stars. And the next two nights were cloudy. Bummer. But we heard an owl or two hooting and we also watched the two bats that often swoop over our property eating insects.

Two evenings ago I took Hannah Joy out just after dark. I shone my flashlight around and the light reflected on two eyes peering at me from inside the forest. The eyes and I stared at each other for a minute or so, and then I heard the whatever-it-was move off. I think it was a deer but, of course, I have no way of knowing since all I saw were its eyes. It made me aware that unseen animals are probably often watching us from the forest.

I turned on the outside lights that are near the deck. and later I saw a raccoon wander up to the deck, tilt its head to sniff the bird feeder, and then wander away. He/she was unaware that I was watching.

Sometime during last night, I was awakened by the strong odor of a skunk. It kept me awake for a while. Ugh.

We love watching the wildlife that lives in, or visits, or flies over our Enchanted Forest. Someday I’d love to get a trail or surveillance camera so I can see the animals that make an appearance during the night.

A week or two ago, Hannah Joy got stung by one of the yellow jackets that have built a nest under one of the posts right next to the porch steps. Now she looks woebegone whenever I start to take her out that door. She prefers instead to go out the door that goes out onto the deck. Poor thing. We aren’t sure, at the moment, how to get rid of them. We might have to get a hornet/wasp spray from the store.

Yesterday morning EJ and I organized the pantry. Our pantry is the size of a smallish- to medium-sized bedroom and is been both a food pantry and a storage room. We threw away some stuff, took other stuff into the garage, EJ donated more stuff at Goodwill on his way to work, and we rearranged the stuff that remained. Now we have several empty shelves to hold our jars of food that we can.

Tomorrow morning we hope to drive to the newest farm store to pick up the items we had ordered. The store is far enough away that when we see sales in their flyers of items we need–such as poultry feed, dog and cat food, and canning jars–we order them on their website and go pick them up when we are notified that they are ready.

Friday morning we plan to go to the local Farmer’s Market to buy green beans, peas, and tomatoes. When we get home, I’ll work on preparing the beans and peas for freezing while EJ cans the tomatoes. He’s been doing research about how to do it. We, of course, will help each other as needed and I’ll learn to can along with him. We are very excited about this new endeavor. I prefer to dry herbs, freeze veggies like beans and corn, but I would really like to be able to can tomatoes. EJ has dreams of also canning venison, stews, and other foods.

Our little Rhode Island Red chicks are growing up fast! They make me laugh because each time I open the door of their coop, they come rushing up. Often at least one gets out and I have to quickly grab her and return her to her cage. It makes watering and feeding them a challenge–but an adorably fun challenge. I wonder if they think I am their Mama?

EJ and I love our peaceful lives together in our beautiful forest.