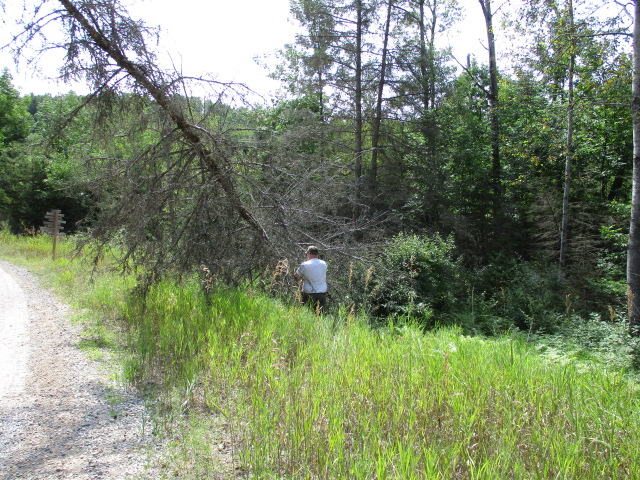 This morning I took EJ out to the chicken coop to look at the roosting/nesting platforms I built yesterday. I described how I had built them while he looked them over. he told me that I had done a very good job–that they looked nice and were very solidly built. I felt very proud of myself.

I haven’t seen any of the chickens on the platforms yet. Impatient, I picked up a hen and put her on the lower platform, hoping she would like it and tell the others. I don’t know yet if she has or will, but chickens are curious birds and I’m sure that eventually they will look at it, especially when the chicks grow up and join the general population.

I opened the door to the second floor of the fancy coop and I was able to get a photo of three of the chicks who had climbed up there. They are getting larger in size and also sprouting more feathers.

Some of our pine trees at the bottom of the driveway have died. EJ suspects pine bark beetles killed them. He’d like to eventually get (I think) Norway Spruce to replace them because the beetles don’t go after them. During a storm a few months ago, the wind caused one of the dead trees to tilt across the driveway. If it fell all the way over, which would happen sooner or later, it would fall across the driveway. We have been discussing how to move it out of the way. EJ couldn’t just pull the tree straight out of the way with the Suburban because he’d have to drive down a rather steep embankment–and I suppose there would be a risk of the tree dropping on the vehicle? We don’t have a chainsaw to cut it up. A chainsaw is on the long list of items that we really could use but can’t afford yet. We finally decided on a plan, and EJ decided to implement it early this afternoon.

EJ hooked a strap around the dead tree and fastened a thick towing wire to it. (I’m not sure what to call it.) He hooked another strap around a living tree further down the valley–the strap was so the living tree wouldn’t get damaged. He ran the wire through the loops up to the Suburban, and then he drove up the driveway. The dead tree was pulled toward the living tree and off the driveway. The eventually straps broke, but EJ got the tree off the driveway far enough that it won’t block us in or out when it eventually falls. I, of course, took a video of the endeavor:

One of my regular egg customers stopped but this afternoon to pick up a few dozen. He has told us that he has a peach orchard and that we can come to pick as many as we want at no cost. He’s going to be gone next week, he said, but we can go pick the following week. I think my regular customers are really nice.

Hannah Joy is still refusing to go through the door onto the porch. It’s just as well because today I saw a couple living yellow jackets going in and out of their nest by the porch steps. EJ has sprayed the crack where they live at least twice, and I have sprayed twice, and they are still alive. They are nasty unkillable thugs.

It’s getting noticeably darker earlier and earlier in the evening. Tonight when I went out to shut the wee beasties in their coop, I heard coyotes howling again. It’s rather a spooky sound.

← Pallets and Platforms
The Kitchen Garden →