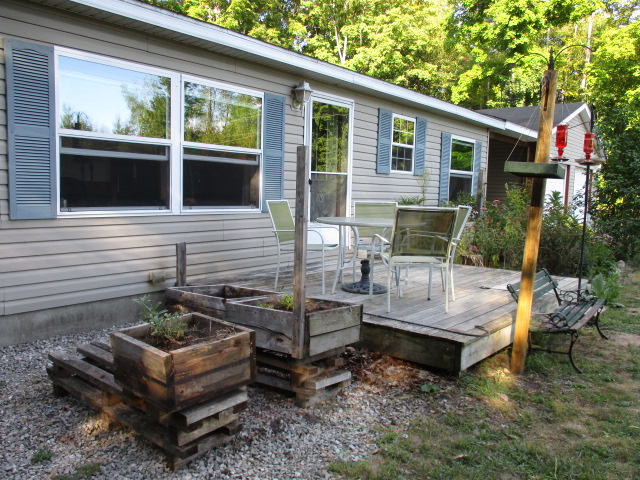 I’m cuddling with Hannah Joy this evening, tired after two days of hard, but satisfying, work.

Yesterday I mowed the lawn. It’s dry enough that our grass has grown slowly so I’ve only had to mow maybe four times this summer. Although the weather was not terribly hot, it was rather humid and I kept melting so I took multiple breaks. I’d go inside and sit in front of my fan for a few minutes until I cooled off. By that time, the washer had finished so I’d take the wet clothes out and hang them on the line. Then I would get back to mowing.

This morning I cleaned out the fridge, throwing out food that had gotten pushed to the back and forgotten. There wasn’t much throw-away food. I also washed the shelves.

Later I began to work on the raised kitchen garden next to the deck in the front yard. It will contain the herbs I use most often: oregano, basil, sage, rosemary, thyme, chives, and maybe parsley. Putting the garden at the front of the house serves two purposes: 1. Currently, I have to go through the entrance hallway, through the garage, and out to the garden to get herbs when I’m cooking. It’s a bit of a trek, relatively speaking, through three doors and a gate. Having a kitchen garden off the deck will make my herbs more accessible. 2. Moving the herbs will free up space in the big garden for more vegetables, such as beans, tomatoes, peas, peppers, and hopefully corn.

I have to set up three or four more boxes to hold all my herbs, but it’s hard work so I’ll do it little by little. I want to get them set up before winter so they will be ready next Spring. Winter is weeks away, so I’ve got time.

I’m thinking about eventually planting lavender around the perimeter of the kitchen garden because I heard that deer don’t like it.

Hannah Joy watched me through the window as I worked. Can you see her?

When I tired of hauling heavy boxes and dirt, I built a ladder for the chickens so they can reach the topmost platform. I don’t know if I like it. It might be better to just put a board ramp to the top. I’ll see if the chickens use the ladder before I change anything. I was thrilled to see them using the lower platform. I’ve found eggs in it yesterday and today. Millie, our black cat, also likes to lay in it. 🙂

The chicks are growing fast. I see remarkable transformation from day to day. They now have many more feathers. They are in kind of an ugly stage between cute little bits of fluffs and pretty adults. Shhhh. Don’t tell them I said they were ugly. They have cute personalities.  They start chirping when they hear me coming, and when I open their door, they rush up to see me. 🙂

EJ doesn’t have to work tomorrow (his regular workweek is 10 hours Monday through Thursday). We plan to go to a Farmers Market for more tomatoes and spend the rest of the day canning them.

Yawn. It’s almost time to shut the chickens and cats safely in their coop for the night. Then I get can my pj’s on and relax until bedtime!