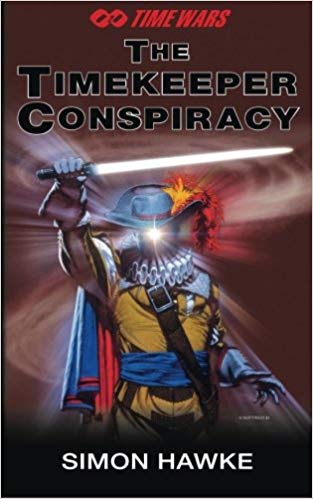 I haven’t written for a couple weeks–not since December 1. I (and EJ too) have had a lot on my mind that I’ve been processing and working through. It is difficult to write when my heart is filled with sadness. Yet, we know that the decisions needed to be made, and we will get through this. I actually have a lot of hope for the coming year–that we will be able to heal. Maybe I will write about what we’ve learned over the years about letting go and reaching forward closer to the New Year, at least in part.

But not right now.

Right now I want to write about happy things, not sad ones.

A couple of weeks ago, I found myself reading the first book of one of my favorite series aloud to EJ. I often describe to him interesting books I am reading or read him a well-written sentence or description that I enjoy, but I don’t often read aloud whole books. But this series, Time Wars by Simon Hawke, is a lot of fun, with some humor as well as some interesting philosophical discussions about time travel, so one thing led to another and I read the whole book. Every few chapters, I asked EJ, “You want me to stop or continue?” He replied, “Continue if you aren’t tired,” so I did. I enjoyed sharing the book with him.

So I started reading the second book with EJ. We both thought it would be fun to read the whole series together. Only this particular book took place in France during the time of the Musketeers. This caused me a lot of problems because it had some French words in it–such as monsieur or D’Artagnan–and I simply cannot pronounce them. EJ tried to help me, and I’d get the words right (more or less) once or twice before they slipped away from me again. I ended up laughing so hard that I cried every time I came to one of the unpronounceable French words that I thoroughly mangled. I finished the chapter–barely–and then I told EJ that he was going to have to read the second book aloud because I simply couldn’t do it.

I apologize if I have any French readers, but it seems to me that their language is filled with unnecessary letters–such as the word “devereaux,” which was the name of a road in the area we used to live. It is pronounced, “dever-roo.” Uh, at least I think it is. Why not just spell it that way? How “eaux” becomes “oo,” I will never understand. Why is the “x” even in the word? Did some long-ago insane Frenchman decide to just throw a bunch of letters together and pronounced them as he pleased with no rhyme nor reason?

The French should not feel insulted because I think the English language–MY language–is wacky too. After my aborted attempt to read the book, EJ and I started redesigning the English language. For example, the letter “c” sometimes has a hard sound like “k” and sometimes a soft sound like “s” in English. So why not simply use “k” and “s” and forget the “c”? So “Cindy” would become “Sindy” and car would be “kar. But then EJ said that the letter “c” could be used for the “ch” sound, using one letter instead of two to make the sound. Awesome idea! “Church” would be spelled “curc.” And we would make the letter “g” for the hard “gah” sound and use “j” for the soft sound it sometimes makes, since a soft “g” and the “j” sound the same. Therefore, “garage,” in which the first “g'” is hard and the second “g” is soft would instead be spelled “garaje.”  EJ said he would just use the “Q” and drop off the “u” in words since the two are always paired, making the “u” unnecessary. Given time, we could rewrite the whole English language so it made more sense. I wouldn’t dare try to rewrite French. 🙂

Ah, well, I will bid this topic adieu. That’s pronounced “Ah-doo.” Or “Ad-you.” Or something.

Our neighbor down the road and around the corner has been snowblowing our driveway for us. He started doing it last year when he saw me struggling to snow blow our driveway.  It takes us at least 2 hours with our small snowblower to clear our driveway and he can do it in about 20 minutes–if that–with his tractor. He does other neighbors’ driveways too and doesn’t accept payment. I’d like to fix him a plate of tasty treats for Christmas as a thank you because it’s such a blessing for him to do it for us.

My friend told me that one of her friends bought an instant pot earlier in the year and loved it so much that she’s been urging her to get one too. I guess you can cook all sorts of foods in it at a fraction of the time it would normally take with other methods. My friend bought one for a relative for Christmas, but then she and her husband decided to buy themselves one too. And then they thought, “EJ and TJ cook a lot. I bet they’d get a lot of use out of one” so they bought us one too! They are such awesome friends. In fact, we have “adopted” them as family.

The post office sent me an email notifying me that the gift would arrive today. Delivery people do not like to drive up our long, steep driveway in the winter so they put packages in a wooden box at the end of the driveway. I call it “The Magic Box” because every now and then packages “magically” appear in it. 🙂  I suspected the package would be large, heavy, and unwieldy to carry so I got one of our sleds out of the garage. I sort of cracked it a little when it hit something as I pulled it down from the rafters, but it’s still usable for my purposes. As soon as I received a text from the post office that the package was delivered, I walked down the driveway with the sled to get it. EJ would have driven down, but he was still sleeping and I didn’t want to wait. We can’t see The Magic Box from the house and I read of people stealing packages–they are called “porch pirates”–so I like to retrieve packages as soon as I can.

I opened The Magic Box and there was my package! It was indeed large, heavy, and unwieldy, so I was glad I had thought to bring the sled. I put the package on my sled and pulled it up the long, steep, snowy driveway. I felt like a hardy homesteader of by-gone days overcoming harsh conditions. Ok, it wasn’t that bad, but it was a bit cold and it’s fun to imagine.

When I got the package in the house, Hannah Joy looked it all over. I think she thought it was hers. I told her it wasn’t but she didn’t appear to believe me. An hour or so later, she saw Timmy touching the box and warned him away with a sharp bark. I reminded Hannah that the package was not hers, and Timmy wasn’t hurting it. Hannah isn’t too fond of Timmy the cat.

EJ has already been looking up recipes of things to make with the instant pot.

I am sending my friend some mincemeat for a gift.  She said her family has never had mincemeat pie. Mincemeat is my absolute favorite kind of pie and I wanted her to experience it. I’m also intending to send her a few other things, but I can’t tell you because I want it to be a surprise and she reads my blog. She knows about the mincemeat but not the other things.