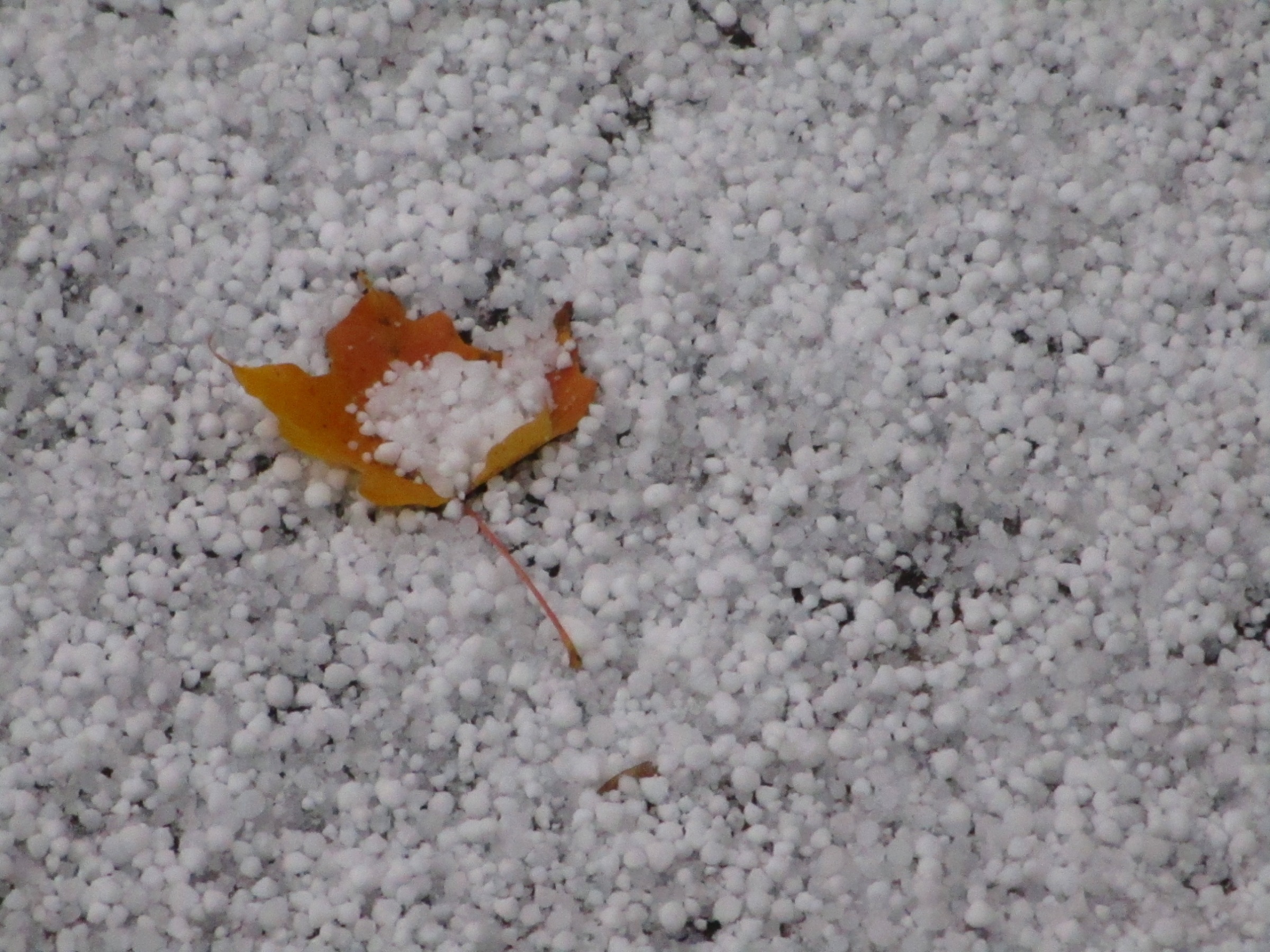 I didn’t know if I would wake up this morning to a snow-covered landscape. When I took Hannah Joy outside in the pre-dawn, I saw only a layer of slushy ice on the deck. Later we had a bit of rain, which turned into a downpour of graupel. Graupel is often mistaken for hail, but it’s actually tiny ice-covered snowflakes rather than ice-covered rain droplets. Here is a video I took of the graupel downpour, which lasted for a couple hours before turning into snow. In addition to ice, rain, graupel, and snow flurries, we had moments in which there were wide strips of blue in the sky and a tiny bit of sunshine breaking through the dark dramatic clouds.

I think the winter white against the autumn colors are very beautiful.

With the arrival of November, Hannah Joy now has to wear her bright orange coat so she’s not mistaken for a deer by hunters. Although she IS a dear, she is not THAT kind of a deer.

Shortly before I went out to gather eggs from the chickens this afternoon, I search for my winter work boots. They were exactly where I thought they’d be–tucked under the bench in our entrance hallway. I brought them into the kitchen and tipped them upsidedown and shook them, just in case spiders had built their home in them over the summer. Then I sprayed the inside of the boots with peppermint water. Spiders hate peppermint, or so I’ve been told.

The chickens haven’t been laying many eggs lately. They stop laying during the dark, cold, winter months. Through most of October I found only two, three, or four in their nesting boxes. Yesterday I found none so I was very happy to find three today. Last year I stopped selling eggs at the beginning of October but had more than enough to last through winter. So this year I sold eggs further into October. That was probably a mistake becase now I’m holding my breath, rationing our egg usage, hoping the chickens keep laying a little longer. It would be awful if we ran out of eggs and had to buy them from the store.

Sunday afternoon EJ was working on the porch when he fell off his ladder. He was coming down off the ladder and thought he was on the bottom step when he was actually one step further up. You know how that is, right? The step down is unexpectedly further than you thought and you fall. I gulped in apprehension when he told me because he suffers from chronic back problems/pain from an old injury and I am worried he will injure himself even worse. He is more sore than usual, but seems to be mostly ok. I told him that obviously neither he nor I can go outside unattended. In late July, some of you may remember, I injured my foot when I stepped out of the coop and fell into a depression the chickens had dug in the dirt.

Last week I used the last of my poultry seasoning. I thought, “Hmmm. I betcha I could make my own!” I searched on the Internet and found an easy recipe. I used mostly my own home-grown herbs, although I had to use store-bought marjoram. Next year, if I remember, I will add that to my list of herbs to grow. The recipe can be found here on my recipe page.

Now that cooler weather has arrived, Hannah Joy has been cuddling under blankets and afghans. She loves to be covered up. Sometimes I think with dismay of her life with her previous owners, who kept her outside 24/7. She was never meant to be an outside dog. She is a total pampered lapdog.

And there there is our cat, Timmy. When the weather turns cold, he warms his paws under the little electric space heater we use to save on propane. Laugh.

During the difficult events of the last couple of years, I have mostly remained calm. We trust God, prepare as much as we can, follow social media accounts of people who research and understand what’s happening, and give and receive support and encouragement from a small group of friends. Occasionally, when stress builds, I (and my friends) disengage for a day or two to regain our calm. It’s important to take stress breaks for our mental health. I’ve found myself feeling a bit more anxiety lately so I’ve been staying away from turmoil, doing things I enjoy, cuddling my dog and cats, and enjoying the beauty outside my window.

← The First of November
A Clash of Seasons →