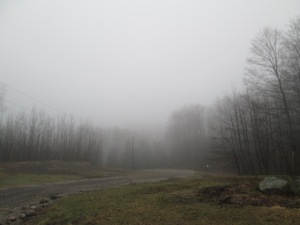 It was very foggy and rainy all day today. I think the fog makes the landscape very pretty, although I worry a bit when my guys have to drive through thick fog.

Because of remodeling we had done over the years at the old house, we couldn’t get our box springs downstairs so we had to leave them behind. EJ built a platform for our mattress here in our new house. At first it was ok but over the months it has gotten more and more uncomfortable and we weren’t sleeping well. I finally googled box springs last week and discovered that they didn’t cost much at all. (We had ordered our left-behind box springs with the mattress several years ago and all I remembered was that it was rather expensive.) Anyway, we ordered new box springs last week and I eagerly counted the days–er, nights–for them to be delivered. It was today! Yay!

I had read in an email that Sears sent me that before the delivery guys showed up, pets had to be contained. It only makes sense. They wouldn’t want to be bitten or blamed for letting pets escape the house. So as soon as I saw the truck coming up the driveway, I yelled for JJ to help me put the cats in his room, and I put Danny in the hallway. The delivery guys wanted to see where they’d be putting the box springs before they got it out of the truck, so I let them in the house to show them. As soon as Danny heard them, he came rushing through the cat door. I told the guys he was friendly and they petted him. Danny has always loved people and used to greet everyone he encountered when we walked in our old town. Up here, he rarely sees anyone so when a stranger appears, he wants lots of lovings.

One of the delivery guys said that he had delivered our washer/dryer when we first moved here.  They set up the box springs for me, helped me put the bed skirt on them, and then put the mattress in place.

Our little chicks and ducklings are growing up. Every morning they are noticeably bigger than they were the night before. The little chicks are beginning to get tiny feathers. We give them lovings everyday. EJ and JJ always hold the ducklings, which are their favorites. I always hold a chick or two so they don’t feel left out.

I took some videos of our EJ, JJ, Danny, and the ducklings.

JJ, Danny, and the Duckling

JJ, a duckling, and the chicks

EJ and a duckling. The duckling keeps biting his beard.

Today was JJ’s last day of work at his company. He told me they all gave him hugs when he left. He starts his new job tomorrow.

← Enchanted Homestead
Ducklings in the Bathtub →